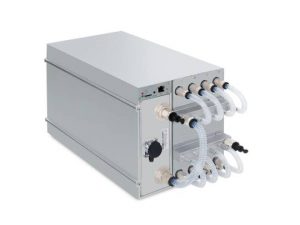 Over the past few years, Bitcoin mining has gone from an obscure underground practice to the stuff of financial news headlines. One thing that hasn’t changed is the level of computing power that is required to do it. The average desktop can’t handle the task with any level of efficiency, so special computer setups, often called mining rigs, are are needed.

Bitmain is one of the biggest manufacturing companies that is making computers specifically for mining Bitcoin and other cryptocurrencies. They have just announced a new product called the Antminer S19 Pro+ Hyd that represents the cutting edge of Bitcoin mining technology and will release later this year. Unlike the air-cooling fan system that most computers use for cooling, this Antminer S19 Pro+ Hyd uses the latest liquid cooling technology.

Liquid cooling works by submerging the mining computer in a specialized synthetic hydrocarbon liquid that doesn’t conduct electricity. This substance reduces the heat and power consumption the computer uses in order to increase its efficiency and also extend the life of the equipment. Both of these factors will increase the ultimate profitability of any cryptocurrency mining operation.

The Antminer S19 Pro+ Hyd also boasts increased hashpower over Bitmain’s previous offerings. It has a hashrate of 198 TH/s, power efficiency of 27.5 joules per terahash (J/TH) and will consume 5445 watts of power at the ideal operating temperature of 35°C. This is more than enough power to generate a good return on a mining operation.